Everything You Need to Know about E26 Bulb There is an array of different light bulbs on the market. Sometimes, it can be confusing when you’re trying to make a purchasing decision. Many bulbs on the market have the same shape and even similar appearing bases; yet those bases may be in different dimensions. You should familiarize yourself with the technical term for bulb bases. For this purpose, you first need to establish the knowledge to identify a screw, wedge, bayonet, or bi-pin. This article mostly focuses on screw bases, including E26, E27, and E12, the commonly seen types on the market.

When browsing the market in the U.S, the E26 bulb is a common type of bulb that you will most certainly come across. What is E26 and what do you need to know?

Although there is a variety of shapes and sizes, light bulbs are largely categorized by their screw thread bases, and E26, also known as a Medium Edison Screw (MES), doesn’t refer to a specific shape of a bulb, but the cap or base of a light bulb, which allows for both electrical and mechanical contact. Therefore, it is important to know that the E26 base can be applied to a wide range of bulbs and lamps!

With that being clarified, let’s unpack the myth of the term “E26”.

The image below depicts a light bulb with a Medium or Standard E26 base. 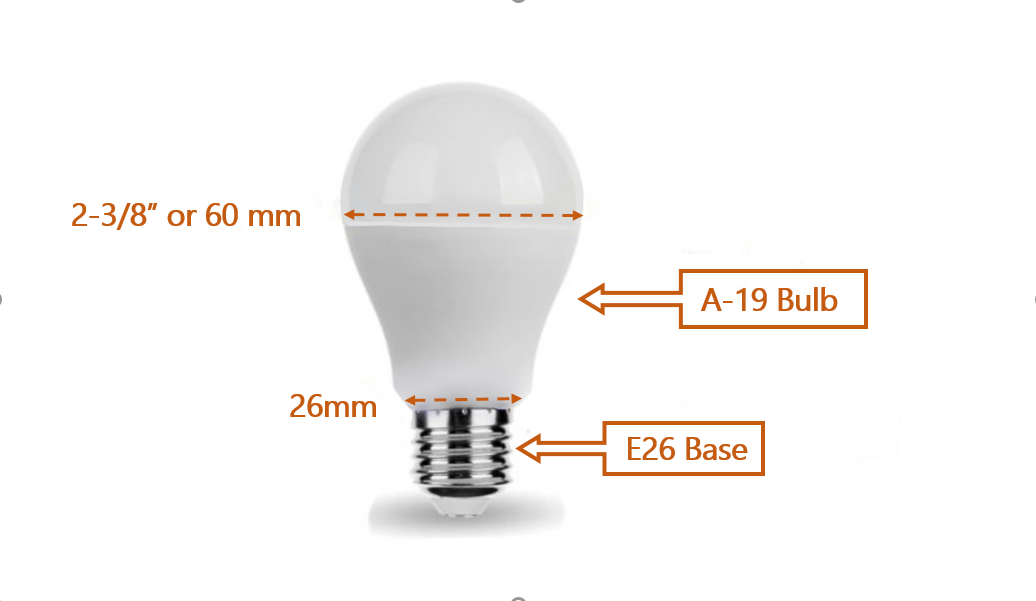 In a nutshell, E26 is a type of lamp base used on a light bulb and does not tell us anything about the bulb’s shape. E26, also referred to as a “medium” or “standard” base, is the most common size of light bulb base in the US.

With E26 being clarified, we can refer to an E26 bulb as any bulb or light that makes use of an E26 base for mounting. An E26 bulb is most easily identified by looking at the non-light emitting side of the bulb. An E26 bulb has a metallic base with screw threads that are roughly 1 inch in diameter. Another method to be certain is to look at the printing on the bulb, the wattage and the brightness. Manufacturers will generally put “E26” to guarantee that they can be used safely with suitable lamp holders.

What type of light bulb socket do you have, and which lamp holder/socket will be compatible with the type of light fixture you have? We understand how difficult it can be to figure this out. To make the right call regarding this, you must first understand light bulbs and the different types of bases available. This will assist you in determining which type of socket to use with your light bulb.

While we don’t have exact figures, we’d guess that well over 90% of light bulbs sold in the United States have a “Medium” E26 base. Blindly pointing your finger at any light bulb and betting it is E26 base, you have, indeed, a 90% chance of winning.

Dimensions of E26 Base and Other Common Bases

E26 standards are defined in standard 7004-21A-2 by the International Electrotechnical Commission (IEC). They specify the precise dimensions to which E26 lamp bases must be manufactured.

The comparison of the sizes of different lamp bases:

Don’t worry if different light bulb shapes have you perplexed. E26 bulbs are available in a variety of shapes, with the base thread size, as in 26mm, remaining unchanged.

Where is an E26 Light Bulb Applied?

E26 is among the most commonly used lamp bases in Japan, North America and other countries that use 120V AC. Although previously most commonly associated with incandescent lamps, they are now also commonly seen in fluorescent CFL lamps and LED lamps.

Furthermore, the installation of E26 is quite hassle-free, requiring no tools, assembly, or sweat. 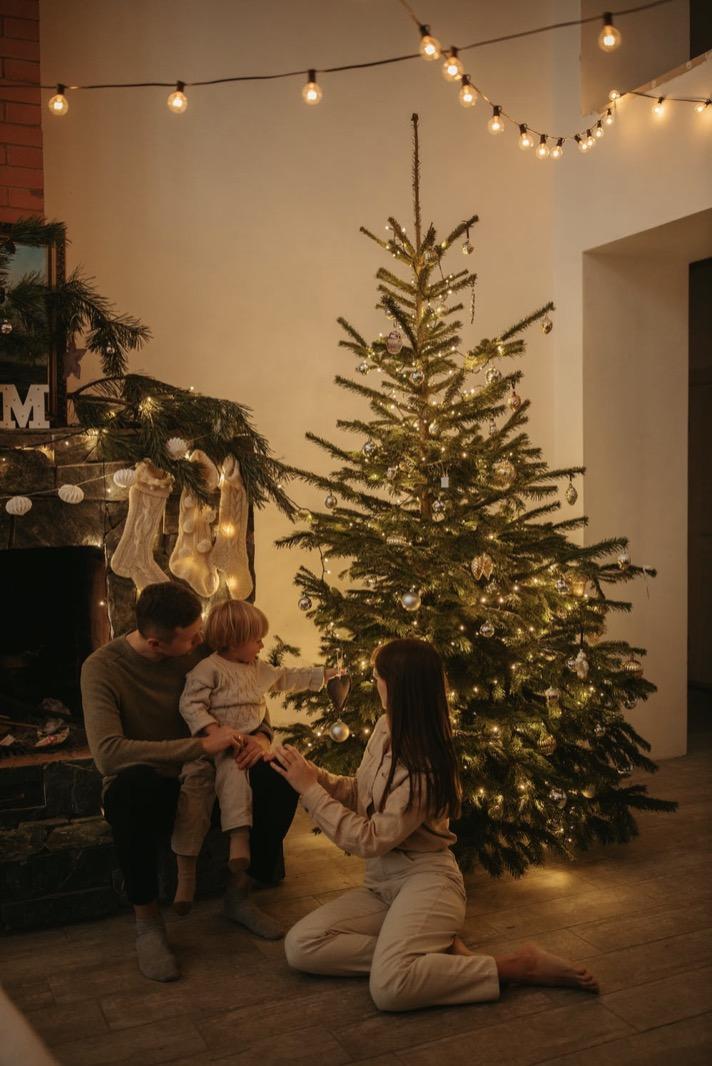 Furthermore, the installation of E26 is quite hassle-free, requiring no tools, assembly, or sweat.

What to be Aware of When Buying an E26 Bulb?

Since E26 bulbs are frequently applied lamp bases, it should be no difficult task to find one, either at your local electronic appliance store, or from an e-shop.

However, as you may have noticed, low-cost LED bulbs with an E27 base are available from foreign suppliers on eBay and Amazon. Although these will technically work in E26 bases, it is usually a dead giveaway that the bulb was not specifically designed for the US market, and this bulb may not up to the standard of proper North American, UL, or ETL safety certification, and therefore, it is suggested to avoid these choices on the market.

Although mechanical and interchangeable, the E26 gives less insulating and protection against short circuits and electric fires than other types of sockets that are not specifically made for E26.

What are the specifications for base types E26 and E27? As you may have guessed, since E26 indicates a 26 mm thread base, E27 refers to a thread base of 27mm instead of an E26’s 26mm base. Not that confusing, right?

The threads of E26 and E27 differ by only 1 mm, making them nearly identical. Nonetheless, it is critical to purchase the correct bulb that is certified for use in your country. After all, each country and region has different certifications.

Although nearly identical, you cannot always replace an E27 bulb with an E26 bulb. Many light bulb makers and retailers will simply say that E26 and E27 bulbs and sockets are compatible. They will argue that an E26 bulb may be securely installed in an E27 socket and vice versa.

E26 and E27 lamp bases are often mechanically interchangeable, which means you can physically insert an E26 bulb into an E27 socket and vice versa.

However, simply because a bulb fits and works does not imply that your lamp installation fulfills the electrical safety requirements for which the lamp and lamp holders are intended. In fact, a mismatched installation might increase the likelihood of short circuits and electrical fires.

The minimum distances between the bottom contact (live contact) and the screw threads vary between E26 and E27. The reason for this discrepancy is that the E26 and E27 standards are meant to operate at different line voltage levels – 120V AC and 240V AC, respectively.

Bulbs with the designation E27 are generally safe to use in the E26 lamp holders; however in the case of E27 lamp holders and 240V AC, E26 bulbs may represent an electrical safety risk.

What is E12? It is the second most common type of light bulb base found in the U.S. You’re probably acquainted with E26 lamp bases, which are the basic screw-in lamp bases that are widely used in regular A19 lamps.

E12 employs the same naming scheme as E26, with the letter “E” denoting an Edison screw base. The number 26 after the letter “E” represents the screw base diameter—12 millimeters, or roughly half an inch.

Candelabra base is another name for E12 base. Chandeliers, petite nightlights, and decorative lights often apply this kind of lamp base, which is approximately half the size of an E26 light bulb base.

Here is a brief description of the two most common light bulb base types:

To make your shopping process easier, what else is there to know? When shopping for light bulbs, chances are you may come across the terms A19 and E26. What are they? Let’s find out!

The name A19 is made up of two parts: the first letter “A” and the two-digit number “19”. The letter “A” indicates the bulb’s overall shape, specifically, a classic bulb’s shape that is pretty much identical to an upside-down pear. An A19 bulb has a diameter of about 2.4 inches by definition, simply put. The two digits “19” following the letter tell the diameter of the bulb’s widest point, which is measured in eighths of an inch.

A19 denotes the width of the bulb at its thickest point (the white circular circumference). The A rating refers to the bulb’s form. E26, on the other hand, denotes the bulb’s base type. Therefore, A19 and E26 are two different things. These two distinct components of a bulb, however, are almost always combined.

As required by ANSI standards, A19 bulbs must always be mounted in a light fixture with an E26 base.

However, keep in mind that the opposite is not true: not all E26 bulbs will be A19 in shape. Some come in shapes that are entirely different from the shape of A19.

Recommended A19 and E26 Bulbs

Now that we have seen the distinctions between A19 and E26, there are some recommendations for you to get the best bulbs that suit your needs the best. So, if you are searching for one of them, you’ll know precisely what you should get.

Let’s begin with the market’s one of the greatest bulbs of E26. One of the most beautiful bulbs is the Yeelight Smart LED Light Bulb. It’s a smart LED bulb with a 1700-6500K color temperature. Unlike the conventional bulbs that you may usually find at a local hardware shop, this bulb is environmentally friendly and energy-saving, with an easy setup and built-in Wi-Fi. As for A19 bulbs, originally, A19 bulbs were produced using incandescent technology, but are now accessible as energy-saving LED options. There are many bulbs of proven quality on the market, such as the Philips Ambient Dimmable A19. How to Install Smart LED Bulb